Would You Marry Me? 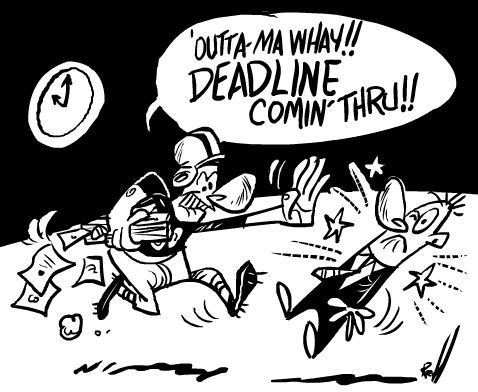 I’d like to lead an effort to collect literature on all things Producer- related. It’s not the most exciting read, I know, but it is what I do. There’s not much of literature out there, but here’s an article that I will add to the small producer collection. It comes to us via a colleague that will be identified as “LA” for now. It’s an on-point generalization that’s both very familiar and comedic.

I Want To Marry a Producer

Since every single person I’ve met over the last 15 years works in advertising or some related industry, I’ve realized that I’m destined to marry an ad person. After a brief panic attack, I thought about producers and felt much better. I want to marry a producer.

I don’t want to marry an account services person. Sure, they can take lots of pressure and abuse from the world, and they’re organized (a definite prerequisite for my future spouse), but we’d quickly realize that while we share many goals, ultimately, she may not care enough about my goals. And caring about my goals, or at least seeming to, is very important.

I’m not going to marry a traffic person. They propel jobs through the agency and thus are obviously good at getting stuff done. But they cry too much. Or they yell too much. Or they cry while yelling. There is crying and yelling at some point in every marriage. I wish to keep it to the bare minimum in mine.

Marrying another creative seems like a great idea. We would laugh together. We would dream together. We would make amazing plans together. But we wouldn’t know how to get any of those plans done or how to actually make anything happen. And then we would blame each other.

I could marry one of my clients. We would have a great initial relationship. She would find me really funny and inventive, but over time, she might begin to doubt my motives and commitment. And she’d be right. Am I bored? Am I ultimately looking to trade up? Am I looking for a newer, fresher challenge? I’d be coy and say no. But the real answer would be… maybe.

No, I want to marry a producer. A producer listens to the most batshit crazy idea and doesn’t say yes or no or ask why, but instantly asks “How?” She could talk me out of dumb things with grace and logic, or conversely show me what it’s possible to do with virtually nothing. A producer realizes that just as business and creativity need each other, responsibility (her) and irresponsibility (me) do too. A producer wouldn’t be afraid of different challenges, no matter what form they took. A producer would be tough, fighting battles I’d neither see nor even know about. A producer would plan for a rainy day and not even tell me she was doing it and then, when it started to rain, she’d say, “It’s covered, go over to the food table.” A producer would stay up all night partying with me, then make sure what needs to get done gets done, while I sleep. Marrying a producer would allow me to be as self-absorbed, self-indulgent, self-congratulatory, naval-gazing and “creative” as I want to be.

Of course, I could always date someone outside of the industry and see what the rest of the world is like. But that would be weird.

DocMorris’s Holiday Spot “Christmas Film” Is The Best of 2020

Category : Advertising, commercials, Video
DocMorris Holiday Spot Is The Best of 2020. Convince me it's not.
Read More

The Voyeur In Us: “Drive”

Category : Advertising, Entertainment
Take a close and careful look at the images below. What goes through your mind? From top to bottom, they are arranged from amazingly intriguing...
Read More

Category : Digital, Social
I didn’t know much about Tumblr, so I registered on it last week. Funny, I thought, considering that I had only recently begun using another...
Read More

Behind Every Great Project

Category : Digital, Producer
Do you believe that behind every great project is a great producer? I wouldn’t agree that he or she has to be a “great producer”....
Read More

This site uses Akismet to reduce spam. Learn how your comment data is processed.