In the video below, you will see my first stab at graphics animation for a piece that was presented at this year’s SXSW. I worked on this video in the capacity of a Producer, managing the Motion Design team. The video announced the collaboration between VW and Google through an app named Smileage, touted as “the first social app made to maximize fun on every drive”.  You’ll read a little more about it and sign up for notifications, here.

The schedule was so accelerated that I’d rather not go into details because I don’t want the pace of work to become standard. Needless to say, it was extremely fast paced with late nights (or more accurately early mornings) and hurried trafficking.

Despite the rushed schedule, the video turned out really well. The most important takeaway is that a project’s success is a direct result of  the entire team needing to be great and always, emphasis on always, being available throughout. And that, they were – simply great.

DocMorris’s Holiday Spot “Christmas Film” Is The Best of 2020

Category : Advertising, commercials, Video
DocMorris Holiday Spot Is The Best of 2020. Convince me it's not.
Read More 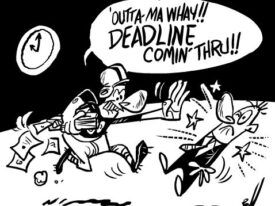 Would You Marry Me?

Category : Agency, Producer
I’d like to lead an effort to collect literature on all things Producer- related. It’s not the most exciting read, I know, but it is...
Read More

The Voyeur In Us: “Drive”

Category : Advertising, Entertainment
Take a close and careful look at the images below. What goes through your mind? From top to bottom, they are arranged from amazingly intriguing...
Read More

Category : Digital, Social
I didn’t know much about Tumblr, so I registered on it last week. Funny, I thought, considering that I had only recently begun using another...
Read More

This site uses Akismet to reduce spam. Learn how your comment data is processed.